Ribble Valley International Piano Week is a festival of piano related musical events, held in July each year, and from 2011 has been at the purpose-built Croston Theatre, Westholme School on the rural outskirts of Blackburn, Lancashire. Ribble Valley International Piano Week is the promotional name of Blackburn International Music Festival, a registered charity (number 1015162), which was established in 1987 and since 1991 has been an annual event. The festival is keenly anticipated by piano music lovers, not only throughout the North West of England, but much further afield, many of whom return year after year. Since 1991, our Artistic Director has been internationally renowned concert pianist Martin Roscoe who usually performs two or three times during the festival.

Each year we include alternatives to solo piano recitals – piano quartets and trios, wind ensembles or solo instruments with piano. We have also programmed spoken word events combined with piano – Sir Andrew Motion (former Poet Laureate) and Tim McInnerny  (Blackadder) have both performed in recent years alongside pianists Ian Buckle and Lucy Parham. Pre-concert talks, which are free to ticket holders, and the opportunity to play the piano onstage yourself have proved very popular too.

We always incorporate “rising star” lunchtime performers during the week  – young people who we encourage in the early periods of their professional careers , giving invaluable experience to them and an opportunity for our audience to do some talent spotting. 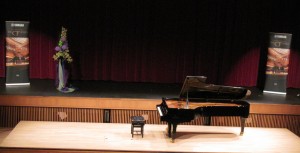 We are indebted to Yamaha for their continuing support over the years in kindly loaning us one  of their superb concert grand pianos.