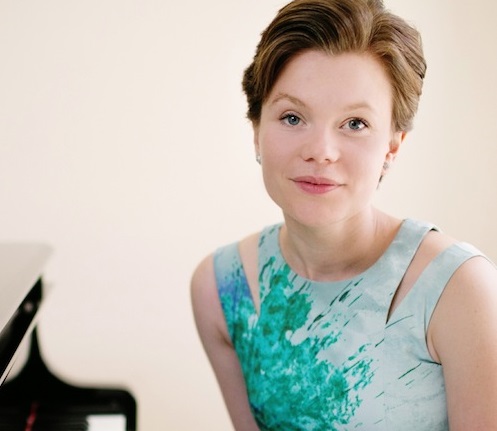 Since she played for us in 2012, Clare appeared as the young pianist in Alan Bennett’s film The Lady In The Van, and has also appeared with him in word and music productions on the same theme.  www.clarehammond.com/ladyinthevan

Here is what she says about her visit to play for us in the Ribble Valley International Piano Week!

Do you enjoy playing at festivals like RVIPW, and how does it feel to be asked?

I love playing at festivals because you have the chance to engage with an audience who are really committed. People often go to great lengths to attend several concerts over the course of a festival and you can feel that enthusiasm when you perform for them. It’s always exciting to be asked to play for a new festival.

What did you think of the welcome you received?

The audience at the RVIPW were very welcoming and it was a joy to play for them. I was just setting out at that stage so it was particularly encouraging to receive support early on in my career.

Absolutely vital, particularly in rural areas that are not well served by other cultural organisations. They provide a forum for people to hear a programme of high-quality classical music which has been designed with the community in mind.

And how important for the development of young performers?

These festivals provide opportunities for young performers both to play to a supportive audience and to hear more established artists in concert. I remember listening to a recital by Jin Ju the evening before my performance in 2012. Her performance was revelatory and had a great influence on my development over the months that followed.

I try to select a programme that combines well known and popular pieces with music by lesser known composers that deserves to be played more often. I think people always enjoy hearing something new!

The preparation is ongoing. I tend to learn new repertoire during quieter periods in January and August, then work steadily throughout the season to revise and refine pieces. I once thought about keeping a record of how much time I spent preparing for each concert but it rapidly became too complicated to compute!

I was very well taken care of and enjoyed the opportunity to meet new people who were clearly committed to classical music. It was a very positive experience.

You have a great rapport with audiences. How important is this aspect to you?

I think it’s very important to speak to audiences, particularly when performing unfamiliar repertoire. There are always so many interesting stories that throw new light on the music. It adds a whole new dimension to the concert if people are aware of those and if they can hear how the artist relates personally to the repertoire.

Do you have a personal highlight from your RVIPW concert?

Managing to get through ‘The Bee’s Wedding’ by Mendelssohn in one piece. I hadn’t expected to give a second encore and was very relieved that I could remember how it went!

Tell us about your up and coming projects. What do you have in the pipeline?

I shall be recording two concertos by Josef Myslivecek with the Swedish Chamber Orchestra and Nicholas McGegan for BIS and am giving the world premiere of Edwin Roxburgh’s ‘Concerto for Piano and Winds’ with the BBC Symphony Orchestra. I also have new commissions by Edmund Finnis and Benjamin Attahir coming up which are very exciting!