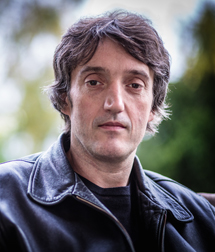 A Q&A from Anthony Hewitt, whose own festival in South Cumbria, Ulverston Music Festival, starts on 7th June

How important is it to you to be invited to play at festivals like RVIPW?

It’s fundamentally important and is my ‘raison d’être’! They provide a vital platform to express myself and communicate in public, and without such festivals life would be barren and I’d suffocate; a tree permanently without leaves, a fish always out of water!

They are the life-blood of our musical culture and heritage. I know of few other countries with such a density of festivals of such high quality. The UK is not a big country, but the frequency and ubiquitousness of its summer festivals means you’d have to live on the moon not to notice them. Think about the enthusiasm surrounding the BBC Proms – the biggest festival in the world – and the Edinburgh International Festival, and I believe they both have a knock-on effect down the ‘ranks’ of smaller and local festivals. They are magnets for music-thirsty audiences and sources of inspiration for artists wanting to become part of them both as performers, and as aspiring new Artistic Directors (artist-led festivals have really flourished in the last 20 years). They also bridge the gap between concert seasons, which habitually run from September to April, and provide both entertainment for the public, and employment for musicians! Can you imagine a summer without them?

Whatever the occasion, I aim to put a varied and cohesive programme together. I generally try to avoid the clichés of starting with Bach and proceeding chronologically (it’s extremely hard to start with Bach when your fingers might still be cold and feel like jelly, and you haven’t adjusted to the change of acoustic with audience – much better as an encore!). Sometimes Artistic Directors will request a certain thread or repertoire strand/style/epoch, and I am always happy to oblige, particularly when they know best the tastes of their audience. I’m not averse to single composer concerts (although come to think of it I haven’t ever done any), except in the case of ‘dry-runs’ as prep for a recording. We are fortunate that the UK is a very hospitable environment for new music, and I think it is really important to include at least one recent work, to avoid running the risk of appearing overly conservative and lacking imagination. British music is increasingly finding its place in the staple repertoire, thanks to many recordings, as well as funding to play British music. I think this has to be encouraged more and more, as naturally an audience at a British festival will have an affinity and interest in our nation’s composers.

It depends on how much I have performed a work, and to what intensity. I like to include something that is new to avoid over-working on repertoire, so that it doesn’t becomes ‘stale’. Much to my surprise, I find it much easier to resurrect repertoire that I did in my 20’s but haven’t done since, than to bring back a piece I have only done a few times, but much more recently. I always make sure to have a dry-run for a few friends, which is worth about ten times the number of practice hours!

How do small, intimate venues like ours compare with larger venues you‘ve played in?

In smaller venues, the audience plays a much important role in both the acoustic and the atmosphere. I often find the acoustic is ideal in rehearsal, but dries out when the hall fills with 100+ people. You have to be prepared to play more legato, use more pedal and not ‘over-egg’ it if it’s dry. Conversely, big churches (often the venue of choice for festivals) add a flattering ‘glow’ and ‘halo’ to your sound, and can hide inconsistencies in your playing. But they also can deprive it of clarity and detail, especially if with adrenalin you play too loudly and quickly, then the texture becomes a bit of a jumble. I generally like bigger halls where you hear an open, spacious sound all around you rather than it bouncing-off the ceiling or walls in your close vicinity. However, there is an immediacy and intimacy to a small venue that places you – sometimes literally – at arm’s length to your audience at a kind of ‘grass-roots’ level, and one that is very important – and possible – to master and use to your advantage.

RVIPW is one of the friendliest festivals in the country, but also one whose audience is very well-informed, with a critical ear. They are used to the very highest calibre of pianist on a regular basis, and expect it, so woe betide any pianist who turns up at a concert like this thinking it’s a ‘provincial’ crowd! I certainly never underestimate my audience, and for RVIPW I have always approached it like a Wigmore Hall concert, but I think the same should be said for any concert, irrespective of the size of the hall or prestige surrounding the event – we serve the music first.

Are festivals like RVIPW important for the development of young performers?

Absolutely. My first season of concerts as a 21 year-old was at music festivals and societies as part of Making Music’s (then NFMS) Young Artist Award. I learned what NOT to do, as much as what I should do, and how to plan repertoire. I was hopelessly impractical and over-ambitious in my programming, pitting the Hammerklavier (which I hadn’t learned a few weeks prior), with Schubert D960 and the Schumann Fantasy in back-to-back concerts! Needless to say I had to change my programme at the last minute, and this is something you learn quickly doesn’t go down well with promoters.

I made my RVIPW debut on the lunchtime series in 2000, by which time I had more experience (and the advice of Martin and Mike) but I wish I’d had this kind of advice and mentoring earlier in my career.

Festivals provide not only performing opportunities and exposure for young artists, but also the opportunity for feedback and monitoring from peers, as well as the all important recommendations to other festivals and promoters.

These days the concert scene is flooded with new and incredible talent, and it’s hard for many gifted young pianists to get a look in – so the more opportunities there are, the better.

You have a great rapport with audiences, and seem genuinely to enjoy meeting the people who come to hear you play. How important is this aspect of your work as a musician?

The age-old adage that classical musicians are stuffy and aloof is fast disappearing, because many artists now are much more accessible as real people, rather than icons on a pedestal (or even on a ‘pedal still’!). It’s now expected that we talk to our audience, both on stage and back stage. There’s no other way to break down the barriers – very few of us can be afforded superstar and untouchable status, and we need to mix with the ‘masses’ if we are to appeal to them. I love chatting to my audience afterwards, and feel lost and empty if I don’t. It’s natural to seek approval and the knowledge you have brought pleasure to the punters, as well as constructive criticism and observation, where warranted!

Is there a particular memory of RVIPW which stands out?

I have had the pleasure of three performances at RVIPW – twice in Stonyhurst College, and once in the new venue, at Westholme School. Peter Donohoe came to my third concert, but mercifully I wasn’t aware of his attendance until he came back stage after the concert! It was the first time I had met him, and had I seen him in the audience, I may well have bolted! As it happens, his forbidding presence belies his big heart and humour! Playing Two Pianos with Martin Roscoe has been one of the highlights of recent years, a ‘duel’ which went back and forth between Cumbria and RVIPW! I also recall having the rare privilege of choosing the height of the stage at my 2011 recital!

I am just coming to the end of a cycle of the complete Beethoven Piano Concerti, plus Beethoven’s own arrangement of the Violin Concerto, and culminating in the Choral Fantasy. To immerse oneself in Beethoven is to dig deeper into the meaning of life and gives immense gratification. Looking further ahead, I hope to replicate my 2012 ‘Olympianist’ Land’s End to John O’Groats concert tour by bike, in….Japan – for the 2020 Tokyo Olympics! That’s still a long way off, and can only be seen with 2020 vision!